The Routers of "Passing Love Letters" Changed the World

It is a time of optimism and progressive, and a time of innovation and beyond, pour in commercial and enterprise growth, the significance of the world is that it is not destroyed an old tradition, but that it is in the establishment of a new world. 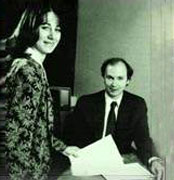 In 1984, at Stanford University, young teacher Leonard Bosack and Sandy Lerner is married (below). Bossag was the director of the center for computer computer department of Stanford University, Lerner was the computer center director of Standford Business College. They were less than 500 meters away from the office space at that time, but because one of them used IBM system, one used DEC system, and the two system could not interoperate. The newlyweds' sweet words could not be delivered in time, which is unbearable for people in love. So, the couple together to design a set of automatic command system will be simulated into another system can read the command used for the data format conversion box use, is the world's first ‘multi protocol router’.

The invention of the router opens the age of the Internet

The invention of routers will integrate incompatible computer LAN into a unified network, which is considered to be the real sign of the Internet age. Subsequently, the couple in California of the United States established CISCO company. On the day of the registration company, they drove through Golden Gate Bridge, because they liked the pronunciation of the name San Francisco, so they took the 5 letters behind the San Francisco as the name of Cisco. And the Logo of Cisco is the Golden Gate Bridge. The towering Golden Gate Bridge is one of the most famous landscapes in San Francisco. It crosses the Jinmen Bay and closely connects people on both sides. It communicates with the connection meaning of communication network.

The routers, invented just to pass the dinner menu and talk about the words, have made a $160 billion IT industry legend. Over the past thirty years, it has played an important role in the world of the Internet. Business success, KPCB began to inject them, because of different management philosophy, the couple out of CISCO in 1990, but it changed the world wit talented love story, let people keep the communication industry so far.

In the age of Internet of Things, cellular routers are still the key to networking

With the development of routers, the processing performance of routers is more and more powerful. It can connect larger networks, and add multiple port functions to connect multiple IP subnets, adding management functions to make intelligent level higher.

Previous: New Year, New Beginning Next: Empowerment for Enterprises - the Establishment of the IoT Association